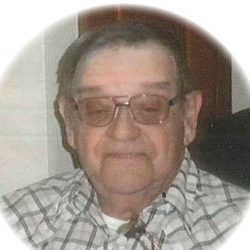 On June 6, 1964, Butch was united in marriage to Karen Kay Norris at the Catholic Church in Burlington Junction. They made their home in Burlington Junction and became the parents of three children, Quinten, Lonnie, and Laurie. In 1975, the family moved to Tarkio, Missouri, where they lived to the present time.

Butch farmed with his dad, Maurice and helped operate their fertilizer business in Burlington Junction. For a short time he worked for Tom Simmons, helping farm the Burr Oak Ranch, south of Tarkio. In the mid 1980s, Butch began driving a tractor trailer for Maynard Freeman.  Butch would eventually own and operate Messbarger Trucking, where he hauled corn and soybeans for local farmers and numerous grain elevators. Butch enjoyed fishing, deer hunting and golfing with his sons.  He also enjoyed league bowling in Rock Port.

There is no scheduled family visitation.

More information is available at www.minterfuneralchapels.com

Everyone is also invited to a Celebration of Butch’s life, August 22, 2020 at the Tarkio Resource Center, Tarkio. The time will be announced at a later date.