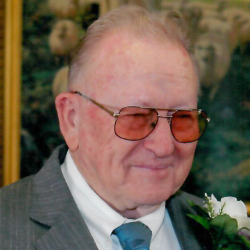 On June 3, 2006, Lee Eddie was united in marriage to Donna R. Harris in Craig, Missouri. They became parents to their “bonus children”, Linda Kaye, Catherine Lynn, Russell Allan, Daniel LaVerna, Kelly Suzanne, Sherry R. and Tamara J. They made their home in Tarkio to the present time.

Lee Eddie owned and operated Stevens Insurance Agency in Tarkio where he sold insurance for 50 years. He also drove a school bus for Tarkio schools for 25 years and was a dispatcher for the Atchison County Sheriff’s Office in Rock Port, Missouri.

He enjoyed woodworking, feeding the birds and squirrels, and spending time with his family. Lee Eddie passed away Saturday, March 23, 2019, at Mosaic Life Care, St. Joseph, Missouri, surrounded by family at the age of 88.