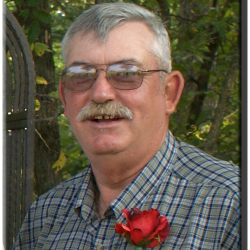 Stephen Thomas (Steve) Hunziger, the son of Thomas and Shirley (Grimes) Hunziger, was born January 9, 1951, in St. Joseph, Missouri. He attended South Holt High School, in Oregon, Missouri, graduating in 1969. He then attended two years of drafting school at Platte College in St. Joseph. On March 4, 1971, Steve entered the Kansas United States Army National Guard and served his country for 23 years, before retiring in 1994.

On May 17, 1972, Steve was united in marriage to Christena Stein and they became the parents of five children, Daniel, Amy, Chester, Joanne and Timothy. They later divorced. On September 9, 2000, Steve was united in marriage to Rhonda Resler in Oregon, Missouri and he became a caring step-father to Rhonda’s daughter, Amanda. They made their home in Craig, Missouri, where they lived to the present time.

Steve was employed by Mead Products for nearly 25 years until its closing in 2004. He then was employed by Cunningham Farms and Supply and Craig Grain to the present time.

Steve was Chief of the Craig Volunteer Fire Department, an EMT and a First Responder. He was a member of the Story-Hardin American Legion Post #164, Craig, and a website community, called the Q Joint Smokers Meat forum. Steve passed away Friday, October 2, 2015, at his home in Craig at the age of 64.